As an office building owner, tenant or employee, you may have questions about the seismic safety of your building or work environment.  This may have been the topic of a water cooler conversation.  You may have asked, “Will my filling cabinet fall on me during an earthquake?"  Predicting a building and its contents response to an earthquake is nearly impossible.  In order to insure safety to building occupants, state building codes provide minimum guidelines for equipment and furniture anchorage. 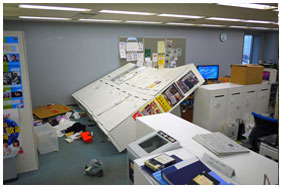 
ASCE 7 is the code that governs the seismic design of nonstructural components and their anchorage.  Specifically, Chapter 13, Seismic Design Requirements for Nonstructural Component.  As a minimum, the items listed in table 13.5-1 shall have positive anchorage to protect the life/safety of the building occupants.  These items include but are not limited to walls, ceilings, cabinets, equipment and fire sprinkler piping. 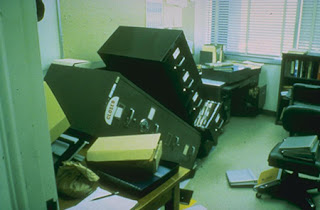 1994 Northridge Earthquake
Posted by Lawson-Burke Structural Engineers at 7:49 AM No comments:

Every year we do several structural assessments of commercial and residential buildings.  Often, we see hot water heaters that do not have adequate seismic restraint.  This is something that is easily overlooked during construction or water heater replacement.  Unrestrained water heaters have broken loose or toppled creating serious threats of fire, explosion and electrocution in past earthquakes. 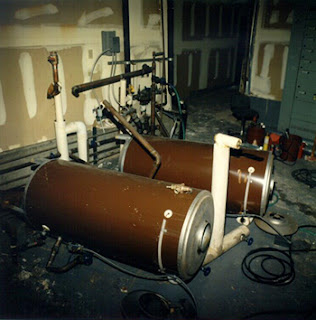 Unanchored Water Heaters Overturned During a Seismic Event
California has adopted Health and Safety Code Sections 19210-19217 to address these life safety threats.  The code states that:


Since this issue affects every building owner and tenant in California, the Division of State Architects (DSA) has prepared some generic seismic restraint details.  The DSA details utilize two methods of bracing material: 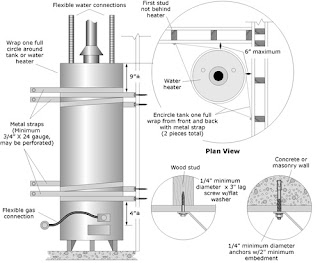 
The DSA details do not apply to every situation, but they are a minimal guide to start with.  There are other manufactured systems available.  Their installation instructions should be complied with.  We also suggest that you consult with a licensed Structural Engineer for any atypical situations or if you questions/concerns regarding your current water heater seismic restraint.  Remember, a loose water heater is a dangerous water heater!

Posted by Lawson-Burke Structural Engineers at 11:17 AM No comments:

If you live in Newport Beach, CA, you may be living in a liquefaction zone.  Soil liquefaction is a phenomenon where saturated soil temporarily loses shear strength during an earthquake causing it to behave as a liquid.  (USGS has an animation that you can view here.) The liquefaction zones in Newport Beach include Balboa Peninsula, in and around Newport Bay and Upper Newport Bay, and in the lower reaches of major streams and the floodplain of the Santa Ana River.  The City of Newport Beach has recently developed minimum building standards to be followed if you own in one of these areas and want to build or remodel a home.  This policy is called “Minimum Liquefaction Mitigation Measures”.  It can be found on the City of Newport Beach website or click on the link above. 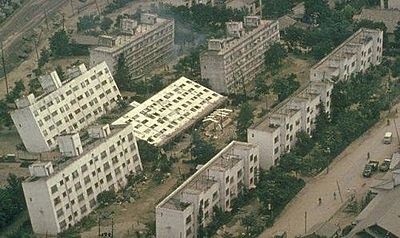 Effects of liquefaction during the 1964 Niigata Earthquake
For a new home or an addition, the new foundation system must comply with these regulations.  An alternate solution is to arrange for a geotechnical investigation/report that directly addresses liquefaction and its mitigation.  The City regulations provides for five prescriptive mitigation solutions, as well as the option for a geological/engineered system, which will require approval by the City Building Official.
The five approved methods are as follows:


5.       Modified Soil Mat
In our experience, “Method 1. Strengthen Slab on Grade Foundation System” has been the most cost effective method to comply with these prescriptive regulations.
These liquefaction requirements are often overlooked in the initial design phase of a project.  This oversight can lead to excessive delays in the permit process as well as construction cost overruns.   Moreover, for those owners that want to remodel or add on to an existing home, they need to be aware of the City’s “75% Rule”.  If the area of an addition, remodel and reconstruction is less than 75% of the area of the existing structure, the mitigation regulation is not applicable for the existing structure.  The existing foundations need not be modified.  Should you exceed this 75 % limit, there are two options.  One, use Methods 1 through 5 listed above, which means shoring the existing structure and constructing new foundations.  Two, use “Method 6 - Other Engineered Systems”.  Under this provision, LBSE has had success by underpinning and adding grade beams to an existing foundation system.
Our advice, retain Architects, Engineers and Contractors that understand the City of Newport Beach Liquefaction Mitigation Policy.  Experienced design professionals will always save time, cost and frustration during the construction of your dream house.
Posted by Lawson-Burke Structural Engineers at 5:18 PM No comments: